I’m blogging to you this week from Minsk, Belarus. In case you are not familiar with this country, it is located in the Former Soviet Union; northeast of Poland and northwest of Ukraine. I am here on business and what I’ve learned this week has warmed my heart. 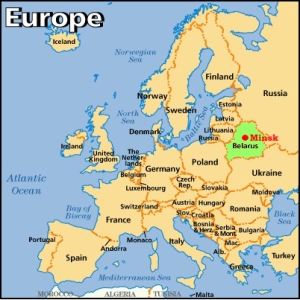 To set the stage of my enlightenment, the following chart lends a perspective on the Jewish population in Belarus as it ranks the “pre” and “post” realities suffered in an awful part of Jewish history.

It is not commonly known that, in addition to the Warsaw Ghetto and others, the Nazis created a ghetto in Minsk. It held over one hundred thousand people at one time. On the edge of the ghetto, there was a deep ravine. This “Pit” ended up being the perfect location to murder and dispose of Jewish bodies. This was proven on March 2, 1942 when over five thousand Jews perished.

An eerie memorial sculpture was commissioned and placed at the site, called Yama, to commemorate the lost lives. It depicts a cross-section of normal people descending to their deaths. 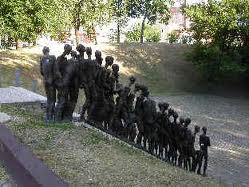 Today, there are around fifty thousand Jews residing in the country; half of whom live in Minsk.

This evening, on behalf of the Jewish Federation of Greater Atlanta that extends grants to fund a variety of programs and projects in Minsk, I participated in a gathering of parents and children who attended a summer family camp. Sitting in a circle, attendees were given the opportunity to share some information about themselves, life in Belarus, and their reasons for attending the camp.

I was deeply saddened by stories of how the Holocaust, Communism, and even fears of modern day anti-Semitism caused so many families to hide, deny, denounce, or be ignorant of their ties to Judaism. Can you even imagine discovering that you are Jewish – only when you are a teenager? I became emotional when people – as young as fourteen and as old as fifty-three – told of how they gradually learned about Judaism, Jewish history, and their family stories as a result of attending the experiential and educational programs my organization helps fund.

I, and most Jews in America, have roots in Eastern Europe. My family – by the grace of God – was lucky enough to escape Poland and the Ukraine and come to the United States. Whether in Boston, New York, Atlanta, or Florida, we’ve been able to be Jewish openly, with few repercussions. In Minsk, however, this was not the case for so many for over fifty years. “The Pit,” in the center of town, offered a constant and terrifying reminder of what did – and could – happen to Jews.

Yet, out of the ashes, Jewish renewal is happening. Families are discovering and beginning to embrace their Judaism. Jewish pride is slowly blooming. Jewish marriages are taking place and Jewish babies are being born. In the wake of decades of darkness, eternal lights are burning brighter.

I offer my sincere thanks and appreciation to the wonderful people at the Jewish Agency for Israel, the American Jewish Joint Distribution Committee, and the World Union for Progressive Judaism for their tireless energy in doing God’s work, dedication to making this world a better place, and eagerness to bravely light the way.