Like many people, I marvel at the phenomenon of how seemingly random events in one’s life spontaneously collide. I also wonder if there is a proper word to describe this circumstance. Is it serendipity? Fate? Coincidence? How is it that seemingly disconnected things in life manage to come together in a way that just makes sense?

Thanks to a Delta airlines “flash sale” back in February, my husband and I decided to book round trip flights to Milan for a summer — belated anniversary — vacation. There was no immediate or obvious reason to choose this particular destination nor was there a specific itinerary in mind. The availability and dates of flights simply fit our schedules. And so, that’s how we came to find ourselves in northern Italy toward the end of August.

Upon doing research on what to do in the area, we decided to visit Bellagio and a few towns along Lake Como, Verona, and Milan.

My love affair with Italian things started when I was five years old. Although I may have been too young to understand the feelings, I coveted a neighbor’s Alfa Romeo convertible. (It had nothing to do with the popularity of Dustin Hoffman in the movie, The Graduate). The sleek lacquered red body and shiny black tires — and the car’s cool emblem — drew me in. I wanted one. Somehow I knew it was cool and different. It may have taken me almost thirty years, but I finally bought one…a hard to find yellow one.

I had no idea, however, that Alfas were built in Milan. Nor did I know that the emblem was taken from the Sforza (a former ruling family) crest. Seeing that same crest on the castle wall as we toured the grounds, was a fun “Aha!” moment. 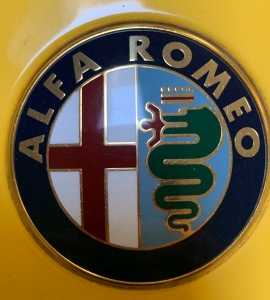 My husband and I met in our ninth grade French class. But it was during rehearsals for that year’s school play, William Shakespeare’s Two Gentlemen of Verona, that the seeds of our relationship were planted. Since then, however, I often wondered about the romantic town of Verona; also home to Romeo and Juliette.

It may have taken forty-three years to get there, but our visit at long last to Verona held much more than the backdrop for plays.

The Verona Arena in Piazza Bra is an ancient Roman amphitheater, built in the first century, and still is in use today. It is internationally famous for large-scale opera performances and event. We were fortunate enough to secure a couple of tickets.

Never having been to an opera before, I wasn’t sure what to expect from La Traviata. Yet lo and behold, as the orchestra began the overture, I recognized the music. I first heard it played in the opera that Richard Gere took Julia Roberts to see in the movie Pretty Woman. His character’s words rang true: “Peoples reactions to opera the first time they see it is very dramatic. They either love it or they hate it. If they love it they will always love it. If they don’t, they may learn to appreciate it – but it will never become part of their soul.” He was right. It was a crystal-clear night, under the stars, in a magical setting. We loved it.

The nearby Valpolicella region is home to some of the best red wines in the world. We discovered my personal all-time-favorite, Amarone (pronounced Ahhhmahrrroneh with a nice long Ahhh and a rolling of the “r”), in an Italian restaurant in Switzerland a few years ago. And so, when I learned that we’d be in the region, I was ecstatic. A full day of touring wineries and tasting wines from different grape varieties (Corvina Veronese, Rondinella, and Molinara) made for a warm, giggly, and happy memory. Amarone remains my favorite. And what could be better than having a case sent home…. 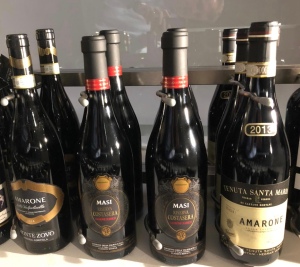 While I fully appreciated the high-end designer and haute couture brands in Milan (did you know that Prada was considered first as it was founded in 1913 as a shop of leather goods in Milan?), the trip’s highlight of highlights was the food. I gladly and willingly abandoned my strict “healthy eating” and daily workouts. Between the pizza, pasta, gelato, wine, coffee, and Michelin star restaurants, I have never tasted better food. And the service was impeccable.

The five pounds I gained that week were totally worth it.

There were many other moments — ferrying across Lake Como, visiting the Duomo (the third largest Catholic Church in the world), and seeing Leonardo DaVinci’s Last Supper — but the above were most meaningful.

I love traveling. I don’t particular enjoy visiting museums and churches. But, I appreciate different cultures…meeting the people, seeing the fashions, learning the history, and experiencing the culinary scene. While I haven’t traveled nearly as much as some of my friends, and certainly want to visit other places, Italy definitely tops my current list.

More importantly, I really loved how different parts of my life came together in northern Italy. It made the entire adventure more fun. It also taught me — from the perspective of someone who works in tourism — how much more impactful a travel experience can be if it connects with and tells the right story. This particular tale will certainly be remembered for a lifetime.