Seventy-five years. For most of us, being married to the same person for seventy-five contiguous years is unimaginable. But somehow, even despite the odds, these two special people accomplished the near impossible. They’ve set an example that is challenging for the rest of us to achieve. We – their children, grandchildren, great grandchildren, and great-great grandchildren – have inherited a legacy that is positively priceless…and daunting.

Surah was born in 1919. Late in her teen years, she left her small town in Poland and went to Warsaw, the big city, where she took a job working as a seamstress for Izzy’s mother. Izzy, upon meeting her, immediately was smitten by Surah’s wit and sense of humor. He also could not ignore the way that others were attracted to her. This young woman, however, was unimpressed by the skinny Talmud scholar whose face bore the scars of the small pox he contracted as a child. Besides, she had a major crush on someone else. Yet, something about Izzy intrigued her.

The times became unbearable. The Nazis were gaining power and there was unrest throughout Europe. On September 1, 1939, Hitler invaded Poland. The Soviet Union invaded its eastern side on September 17th. By October, the Nazis launched a plan to set up ghettos in Warsaw, Krakow, Lodz, Lublin, and Lvov for the Jews. It was clear that it was time to get out. 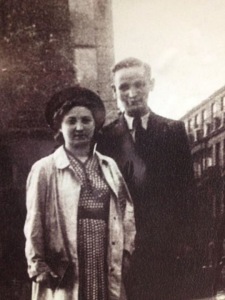 Surah and Izzy were married on November 27, 1939 even though they didn’t know each other all that well. (Hey, it was wartime!) She was twenty; he twenty-one. They fled Poland on foot and then by train. They spent the war hiding out with their families in Siberia. My mother was born a year later.

The war eventually ended, but the road to safety and security was a long and hard one. From Russia to a Displaced Persons camp in Ulm, Germany; they finally settled in Boston in 1949. Their first ten years of marriage miraculously yielded three healthy children despite the most brutal and difficult living conditions imaginable.

It was during those times that I learned about patience, love, and understanding. I also developed my love for coffee, sugar cookies, cabbage soup, and helping my grandmother make her famous krepplach (a Jewish ravioli). My grandmother never ever said a bad word about anyone. She always felt bad for those less fortunate, and did what she could to help – even in the days when she had very little for herself or her family. She is uncomplicated and straightforward.

My grandfather, on the other hand, is the deep thinker. He always told an endless stream of tales from the old country and regularly offered lessons from rabbinic allegories. He loved going out to lobster dinners and to Pancake House breakfasts — all a ploy to get us to spend time with him. I especially enjoyed playing cards with him…even when he let me win.

I asked my grandmother about the keys to a successful long-term marriage. Her answers were simple: (1) Remember that family is everything; (2) Never fight about money; (3) Don’t give up hope. He might vacuum the rug one day; and (4) Keep looking forward to celebrating happy occasions. Huh. Easy for a ninety-five-year-old to say!

While we couldn’t all be together today for Thanksgiving, the entire family will celebrate Baba’s and Zaydie’s seventy-fifth wedding anniversary in one month in Florida. Until then…we love and admire them deeply and wish them a heartfelt Mazel Tov!!!! 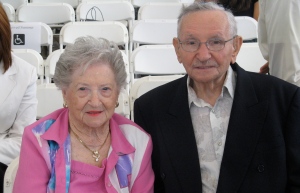 7 thoughts on “Giving Thanks for Seventy-five Years”